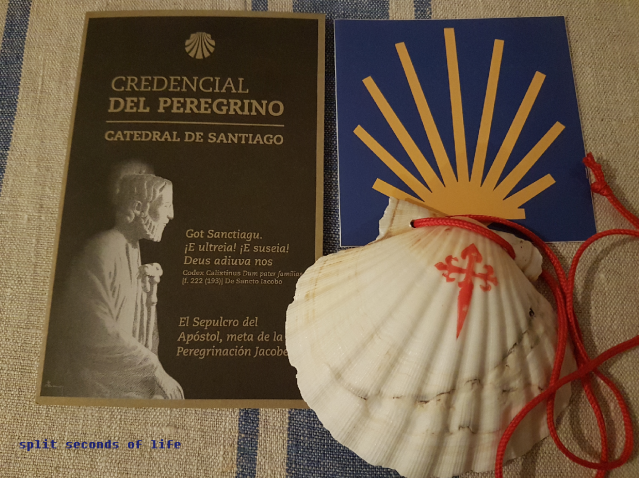 Nearly a year has passed since I quit my job and the first adventure I planned for the time that I was free was the Portuguese part of the Camino de Santiago (St. James Path) which is from Porto to Santiago. Depending on the route you take – the coastal route or the route in the countryside – it can be something between 260-280km. It was actually the first real backpacking experience I did so far. I heard a lot of good experiences – actually all the people I talked to who actually walked the camino ended up loving the experience. But they also told me that I might hate myself for doing it in the first days. But well first I was busy thinking about how to best pack my backpack. Because if you are walking with all the belongings you need for the adventure you might want to take care about how much kilos you put on your back. The recommendation I got was that it should be about 10% of my weight +/- 2 kilos. So I tried looking for light-weight gear and functional stuff. I made a list of what I would need and I did several trials to check that it would not be too much above the limit. Because I also had to consider that I would take some water and snacks with me along the day. And then I decided that I would book the accommodation beforehand as it was at the coast and it was still the end of the summer season. The days before the flight I was quite nervous and was asking myself if that was a good idea. On the way to the airport I was told by my family that there would be lots of pilgrims at the airport taking the same flight. And I actually expected to see at least a few of them. But this was not true in the end. I was standing there at the airport with my hiking gear (I only brought functional clothes) and there was nobody in the boarding queue who looked like a pilgrim. I already heard that this version of the Camino is less crowded than the Camino Inglés but well. I arrived at Porto in the late evening and it was really foggy and also a bit chilly. It took me some time to find the transfer to the hostel which I had booked. The first hostel was rather a bad deal because it actually was in the same building as a disco. So there was a lot of loud music but the staff was very friendly. I used in ear plugs to shut down the noise – without success. It was so difficult to sleep because I had the feeling that my whole body was vibrating because of the loud music. And I booked two nights in this hostel as I planned to spend my first two days to explore Porto. When it was 3 AM and I was still unable to sleep I checked my phone and looked for another accommodation for the next night and got a hotel room on my own. I thought that the night before my first hike day I should get a good sleep. So the next day I had to check out early and spend the day in the city with my backpack before I could check in in my next hotel. After only a few kilometres walking through the city I was already sweating and my back was aching. How should this be the day afterwards when I would hike about 25km in one go? I was worried about it. Then the day came. I woke up, had a bit of breakfast in the hotel and then there was this moment when I was finding myself walking through the city in the direction of the river and then I saw the first yellow arrow that confirmed me that I was on the camino. It was actually funny because it was an extremely grey and foggy morning and it even rained slightly. Maybe this day was as foggy as my vision of life and the future at that point of time. 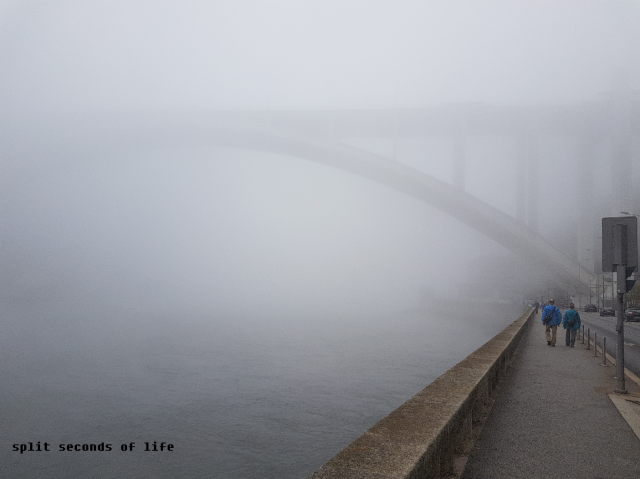 During the first kilometres I hardly saw anyone. Then I started a conversations with two friendly ladies from Australia with whom I made the first half of the day until Matosinhos as they reached their goal for the day. We had some nice conversations and one of them also had a daughter who also made a change of the direction of her life in her mid-twenties. Then I was walking alone again for a while passing a bridge to Leça de Palmeira and it was time to look for a nice place to get some food. And I also wanted to get a stamp for my pilgrim’s passport. So I found a small but quite typical Portuguese place with some tapas-like snacks and different local products. When I entered the store I saw two women sitting there smiling at me. They were also two pilgrims from Germany who met in the pilgrims accommodation the evening before and invited me to join them. And there was a really funny anecdote because of our names. My name is Johanna, theirs were Nicole and Waltraud. I found out that Waltraud had a granddaughter called Johanna and a daughter called Nicole. Nicole had a daughter called Johanna and someone in the family called Waltraud. We laughed about this and continued the hike. The weather got better and the way which was all along the sea actually was really beautiful. It was also quite relaxing to walk with the breeze and sounds of the sea all day long. We made a few breaks along the way to enjoy the views and have some snacks. 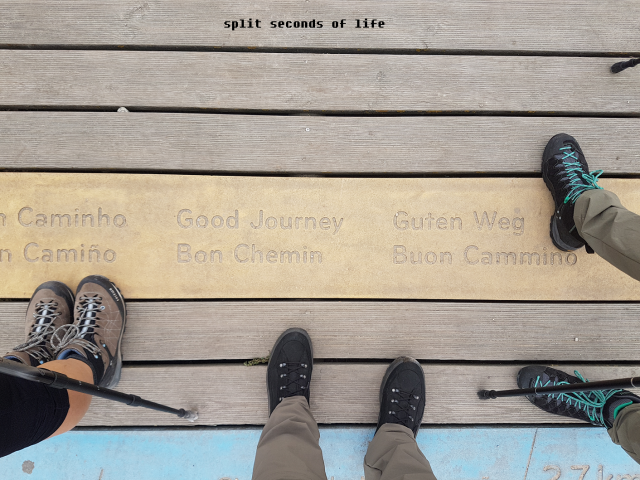 But I found that it was maybe a bad idea to put down the backpack during the break because it was when I realized the immense pain of my shoulders. Thanks to the nice talks I forgot about the pain. But at least I was happy about being on my way. Nicole and Waltraud had their stop in Angeiras and asked me if I wanted to join but I had mine in Labruge which was a few kilometres further. But I joined them for a while in their accommodation and then made my way through a forest to Labruge. This was actually not the best idea because it was lonely and so much more distance than I thought. I was wearing my Garmin watch and tracking the kilometres. When I arrived I had nearly 30 km and my plan was 25km. So the first day got tougher than expected. Then the thing got even more funny because as my accommodation only provided breakfast I asked them about a good place to have dinner close by. They told me that it was about 500m around the corner. As I walked so many kilometres I was felt a strange mix of being very hungry but also being too tired to eat. This is manageable I thought and got out of my hiking boots to put on some flip flops. I walked in a rather strange way as I felt a lot of exhaustion. After some time I tought “This must be more than 500m” and checked Google maps. I actually went into the wrong direction. So I turned around and walked back until I was in front of the restaurant. But as I saw, the restaurant was closed that day. So I checked Google maps and found another one which was about 1 km away – 1km to walk in flip flop! Wow – I did not know that 1 km could seem so far away when it is actually nothing! But I was hungry so I would have to go to this other restaurant and finally made it. The restaurant was nearly empty and I ordered a wine and a bacalao. It was great. I also used the time to write in my travel diary which I brought with me. This night I would get a great sleep I thought. But I actually had to learn that when you pass a point of physical exhaustion it is difficult to sleep. So I was laying in my bed, tossing and turning around. I was so tired and somehow full of muscle ache but I was super proud that the first day went so well and brought along nice conversations and encounters. On the next day the planned distance was short as I only had to walk from Labruge to Vila do Conde so there would be plenty of time to enjoy the coast and relax. This was how the camino experience started, more posts will follow soon.

A human on a journey. In my blog Split seconds of life I write about my experience with career changes and travels, but also other topics I am interested in as cooking, natural cosmetics, photography and there will be some art as well.
View all posts by Johanna →
This entry was posted in sabbatical, Travel and tagged adventure, backpacking, camino de santiago, camino portugues, change, experience, exploring, free, hiking, jakobsweg, just do it, mindfulness, pilgrim, pilgrimage, porto, portugal, reise, sabbatical, solotravel, St. James Path, travel, wild. Bookmark the permalink.